To reduce the variability and dimensionality of spatial feature annotations, the lesion images have been subdivided into superpixels using the SLIC0 algorithm.

A lesion image's superpixels should be semantically considered as an integer-valued label map mask image. All superpixel mask images will have the exact same X and Y spatial dimensions as their corresponding lesion image. However, to simplify storage and distribution, superpixel masks are encoded as 8-bit-per-channel 3-channel RGB PNG images. To decode a PNG superpixel image into a label map, use the following algorithm (expressed as pseudocode):

As an actual Python function using NumPy, this algorithm is:

Each feature file contains a top-level JSON Object (key-value map) with 2 keys:globules and streaks, representing the dermoscopic features of interest. The value of each of theses Object elements is a JSON Array, of length N, where N is the total number of superpixels in the corresponding superpixel mask. Each value within the Array at position k, where 0<= k < N, corresponds to the region within the decoded superpixel index k. The Array values are each JSON Numbers, and equal to either:

For example, the feature file:

Feature data were obtained from expert superpixel-level annotations, with cross-validation from multiple evaluators.

Relevant information to automatically determine the label of a superpixel tile may not necessarily be constrained to within the tile alone, but may involve contextual information of the surrounding region as well.

Participants are not strictly required to utilize the training data in the development of their lesion classification algorithm and are free to train their algorithm using external data sources.

The following tutorial is designed to assist participants in understanding the underlying semantics of the "globules" and "streaks" dermoscopic features: 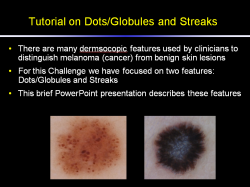 Given the Test Data file, a ZIP file of 335 lesion images and 335 corresponding superpixel masks of the exact same formats as the Training Data, participants are expected to generate and submit a file of Test Results.

The Test Data file should be downloaded via the "Download test dataset" button below, which becomes available once a participant is signed-in and opts to participate in this phase of the challenge.

Note, the JSON Numbers in the submitted Test Results should not be only 0.0 and 1.0, but instead should be floating-point values in the closed interval [0.0, 1.0], where values:

Note, arbitrary score ranges and thresholds can be converted to the range of 0.0 to 1.0, with a threshold of 0.5, trivially using the following sigmoid conversion:

where x is the original score, b is the binary threshold, and a is a scaling parameter (often the measured standard deviation on a held-out dataset).

Multiple submissions may be made with absolutely no penalty. Only the most recent submission will be used to determine a participant's final score. Indeed, participants are encouraged to provide trial submissions early to ensure that the format of their submission is parsed and evaluated successfully, even if final results are not yet ready for submission.

Submitted Test Results feature classifications will be compared to private (until after the challenge ends) Test Ground Truth. The Test Ground Truth was produced from the exact same source and methodology as the Training Ground Truth (both sets were randomly sub-sampled from a larger data pool).

Submissions will be compared using using a variety of common classification metrics, including:

However, participants will be ranked and awards granted based only on average precision.

Some useful resources for metrics computation include: